Soon to be demolished: Engine 46 firehouse is a significant piece of Philadelphia history 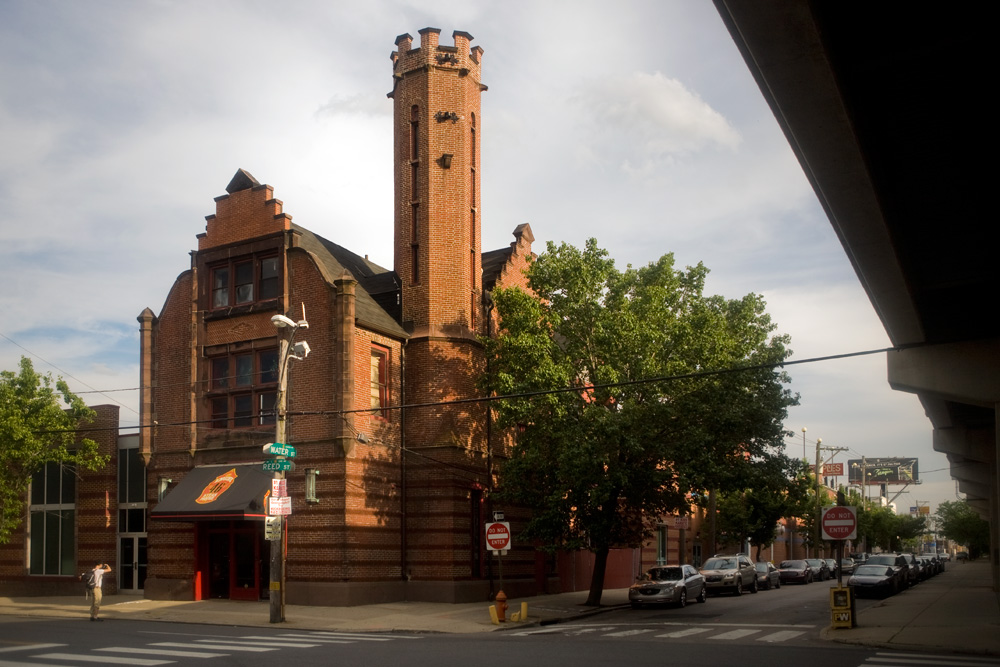 UPDATE: The Philadelphia Historical Commission added Engine 46 firehouse to its list of certified historical properties in January 2018. The immediate threat to demolish the building appears to have abated, although (in November 2018) the building remains unoccupied. Following is an article on the history and importance of the firehouse, written in 2013.

The Engine 46 firehouse, 1401 S. Water St. at Reed St., in Philadelphia, was constructed in 1894-95. The contractor was Charles O’Neill, and the architect was quite possibly John T. Windrim. It is fine example of Dutch/Flemish Revival design, which was last used as a restaurant. This historic building is due to be demolished this week by Cedar Realty for unknown purposes.

In our era, when the stress is on functionalism in architecture, it might be difficult for many to conceive of a fire station as a civic monument. But in 1895, when the Engine 46 firehouse was opened on Philadelphia’s southern waterfront, municipal architecture was often expected to be imposing in style, if not in size. This expectation was especially prevalent in Philadelphia. Although the city was traditionally conservative in its tastes, it had become an industrial powerhouse and the ninth largest city in the world. There were hopes that Philadelphia would soon rival the great cities of Europe in both commerce and culture.

In 1891, Philadelphia’s vision for the future received a spectacular boost with the proposal for a Parkway to stretch from the Public Buildings to Fairmount Park. This was followed in 1895 by the architectural competition funded by City Council for a magnificent art museum to rise above the Parkway.

Just as marvelous in their own way, however, were the unprecedented number of projects for sanitation, clean water, education, transportation, and safety that the city had undertaken to meet the needs of a population now in excess of one million. It was at this time, for example, that a large proportion of Philadelphia’s creeks, which had become fetid with sewage, were covered and diverted into sewers.

In his tasks and perspectives address for 1895, Mayor Edwin S. Stuart reported that in the last eight years the ranks of fire fighters had risen from 543 to 745 men; public school teachers from 2341 to 3005; and police officers from 468 to 2121. The number of fire engines had increased from 34 to 44, with even more on order. And to house the increased services, Stuart pointed out, the city was constructing a tremendous number of schools, police stations, and firehouses. This included the building for the last of Philadelphia’s 46 engine companies, at Reed and Otsego (Water) Streets.

It was assumed, of course, that despite the vast quantity of new projects, virtually all of the buildings, even horse stables and bathhouses, were to be designed with close attention to style. Architects were encouraged to choose their styles from historical antecedents that would appropriately express the power and dignity that Philadelphia wished to claim for its own.

One style that contained those characteristics was modeled on late Renaissance architecture; it had become highly popular in Europe and America during the last decades of the 19th century, especially for public buildings. This was the style chosen for a number of Philadelphia’s firehouses and police stations, which took on the look of Tudor, Jacobean, or Germanic fortified manor houses, with steeply peaked roofs and bay windows. The towers of the engine houses, meant for drying hoses, now masqueraded as castle redoubts.

The building for Engine 46 was rendered in this style, with high attention to design and craftsmanship in its details. In fact, even though it was constructed in a fairly poor Southwark neighborhood and in the shadows of the massive Spreckels sugar refinery, the Engine 46 building was one of the most flamboyant of the Philadelphia firehouses of the day. Many would consider it a fine example of Dutch/Flemish Revival architecture, which is often characterized by the use of stepped gables, and varied brick or terra-cotta ornamentation in the façade.

In documents and newspaper articles from the 1890s, I have found the name of only one architect engaged by the city of Philadelphia to design its firehouses and police stations at the time. That was John Torrey Windrim—only 29 years old in 1895. The fact that Windrim managed to obtain so many city contracts might have had something to do with the fact that his father, James H. Windrim, was Philadelphia’s Director of Public Buildings. The elder Windrim formerly headed the architectural firm that his son John took over in 1892.

John T. Windrim (1866-1932) was one of Philadelphia’s most important architects. He and his firm designed a huge number of the city’s major buildings—and in an amazingly varied palette of historical and contemporary styles, from neo-classical to art deco. Buildings credited to the Windrim firm include the Franklin Institute, the Free Library and Family Court buildings on Logan Square, the Bell Telephone Building on the Parkway, the Philadelphia Electric Co. skyscraper (now Jefferson University) on 9th St., and the PNB Building at Broad and Chestnut.

Unfortunately, the majority of Windrim’s municipal buildings from the mid-1890s have been demolished. Among the buildings from the period that are generally attributed to Windrim and still standing are the former police station at Trenton and Dauphin Sts. (now wonderfully restored and converted into an apartment house), the vacant firehouse on N. 4th St. above Girard, the former Weccacoe Engine Co. 9 at 117 Queen St. (now a residence), and the handsome stone firehouse at 101 W. Highland Ave. in Chestnut Hill—which is still in use but threatened with severe alterations or possible demolition.

All the foregoing buildings have architectural elements in common with those of Engine 46, and all of them borrow liberally from the Renaissance Revival styles I mentioned above (with some Romanesque elements thrown in). But none of these buildings mirror Engine 46 in overall style; the closest to it in appearance was probably Windrim’s 1895 fire station at 26th and York Streets, which was torn down many years ago.

The Engine 46 building, of course, is significant not only for its architecture. Otsego and Reed Streets was a strategic location within Philadelphia’s southeastern port district, where warehouses and yards were piled with lumber, coal, oil, molasses, fertilizer, and other highly flammable materials. The newspapers of the 1890s list a number of incidents in which blazes along this industrial corridor grew into infernos—spreading rapidly from warehouse to warehouse.

For example, on Dec. 11, 1895, less than a year after the completion of the Engine 46 building, what the Inquirer called “a Niagara Falls of fire and smoke” erupted when a watchman’s lamp exploded at the Crew-Levick oil refinery at Otsego between Jackson and Snyder Sts. Without a doubt, Engine 46 men were there. The refinery was destroyed, but the direction of the wind was favorable, and the blaze never reached the major tanks, which each held 30,000 gallons of oil.

Two months later, on Feb. 17, 1896, the Tomson Lye Works, next to Old Swede’s Church on Otsego St., was largely burnt down—along with several nearby houses. Water almost froze in the hoses, but the police tugboat in the Delaware helped to douse the flames, and the wind again was favorable in sparing the historic church.

On Sunday, July 8, 1900, Engine 46 men were instrumental in helping to avert a major disaster when the Thomas Rice & Co. lumberyard at Delaware Ave. and Mifflin St. went up in flames. Several houses and railroad cars were destroyed, and this time, the wind blew the fire directly toward the Crew-Levick refinery and other industrial establishments on the waterfront. But although fire fighters had to battle the flames for over 15 hours, they succeeded in containing the damage.

The Engine 46 crew carried out their tasks with dedication and fearlessness, saving lives and property in southeast Philadelphia for well over half a century. Given that history, the Engine 46 building demands respect. In fact, one might think that prospects would be highly favorable for keeping and re-using such a startlingly beautiful building, a lasting monument from one of Philadelphia’s most significant historical periods—and a work that was quite likely designed by one of the city’s most important architects.

The Engine 46 building is by far the most stylish-looking component of the Riverview shopping center, which is otherwise a bleak and tired-looking collection of buildings centering on a multiplex movie theater. In fact, the Engine 46 tower is the most visible portion of the complex, a landmark for thousands who pass it daily on I-95. It is not difficult to visualize the Engine 46 building once again as a restaurant, the function it held for many years, with tables spilling out onto the shopping center’s now unused central plaza.

Sadly, the Engine 46 firehouse is scheduled to be demolished this week, as soon as July 31. It might be gone by the time you read this article. The corporate owners of the Riverview shopping center (the parent company is Cedar Realty in Port Washington, N.Y.) have declined to state what would take the place of the firehouse, if anything. It is ironic that the magnificent headquarters of men who played a key role in preserving many of Philadelphia’s homes and businesses is now itself to be destroyed—and for no apparent reason.

We hope that the owners will be attentive to the pleas of neighborhood residents and other Philadelphians to spare this beautiful civic monument, a vital piece of our history.