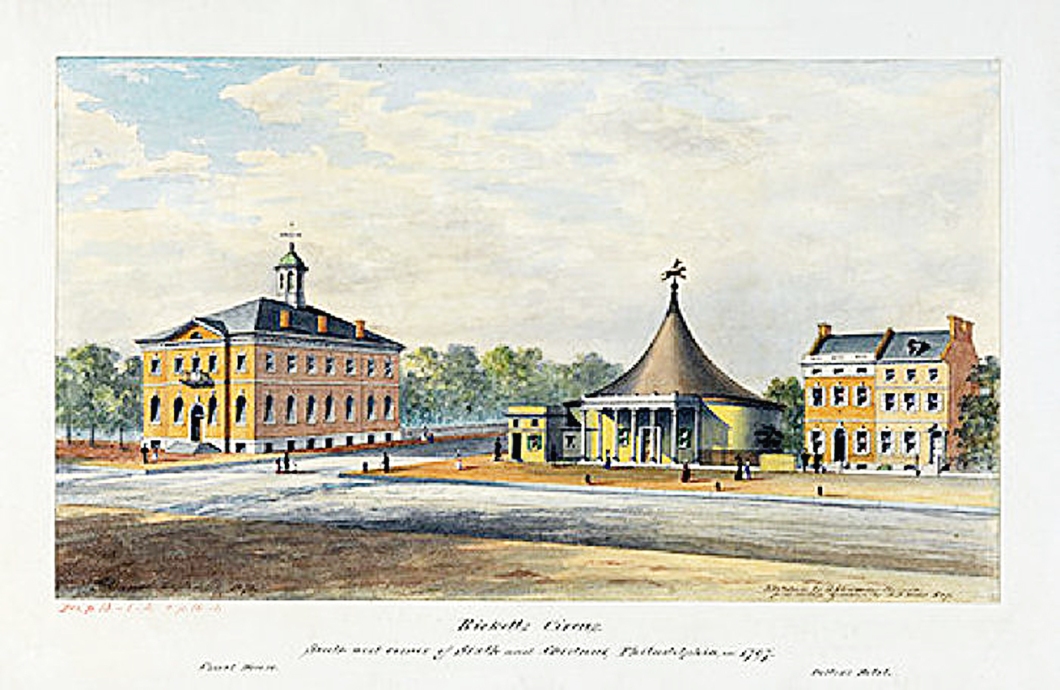 In the 1790s, huge numbers of European immigrants flocked to Philadelphia, the capital of the young American republic, and the country’s commercial and cultural center. One eager new resident, advertising himself as a “pastry cook from Paris,” was Etienne Simonet. At his shop, on S. Second Street near Lombard, opposite the covered shambles of the New Market (now Headhouse Square), patrons could buy pies of venison, gammon, and poultry. Simonet put out the word that his tarts, roasted on a spit, had a “goodness he can vouch for, as he makes them in a manner peculiar to himself.”

But Simonet had another, rather unusual career. He had arrived in Philadelphia in April 1792 as an acrobat with the French émigré troupe led by Alexandre Placide, a former tightrope dancer at the court of Louis XVI. Al­though Placide was an enthus­iastic partisan of the French Revo­lu­tion, he elected to move his company abroad due to the un­settled political situation.

The performers were commissioned to play at Philadelphia’s Southwark Theatre, on South Street near Fifth. The acts performed by Placide’s troupe changed almost nightly at the South­wark, ranging from adapted versions of Shakespeare to ribald comedies such as “Love makes a Man, or The Fop’s Fortune.” The playbill stated that Simonet could be seen in feats of “tumbling,” together with Placide and the featured acrobat, Paulo Redige, who had gained fame in Paris as le Petit Diable (the Little Devil).

In August 1792, when Placide’s company moved on to Boston, Simonet remained behind, since he had met and wooed a young woman from Philadelphia’s French immigrant com­munity, Eugenia Suzanne Magin­iaut.

Just as Placide’s company closed their Southwark show, John Bill Ricketts, a noted eques­trian from England, announced that he planned to introduce to Philadelphia a new type of theatrical event—the circus. In the spring of 1793, Ricketts’ Circus opened to the public in a newly erected arena at Twelfth and Market Streets. And two years later, the circus moved to a new building, the 1300-seat Art Pan­theon and Amphi­theatre at the corner of Sixth and Chestnut Streets. It was directly across the street from the New Theatre, which had superseded the South­wark Theatre as the major house for dramatic plays.

On April 14, 1796, at Ricketts’ Circus, Simonet returned to the stage in a pantomime, playing the role of Harlequin. The program also featured eques­trian performances by John Bill Ricketts and his associates; Ricketts’ son could be seen snatching a watch from the ground while riding blindfolded at full speed.

Soon after his stage appearance, in October 1796, Etienne Simonet advertised that he was forming a partnership with the mime and horserider Pierre Jaymond to open a food shop in the New Market. The shop was located in Jaymond’s house, a handsome four-story building on the northwest corner of Second and South Streets. The pro­prietors sold a large selection of wine, olive oil, vinegar, mustard, and meats, as well as Simonet’s famous meat pies, pastries, and confections.

Soon Ricketts’ Circus gained a competitor. In April 1797, a new circus opened on Prune Street (now Locust Street) near Fifth, where Swedish em­pres­ario and horseman Philippe Lailson had plans for a full season of amusements. The shows were inaugurated with a grand parade of per­formers and horses—perhaps the first circus parade in Amer­ica. The opening spectacle included “The Four Valiant Brothers,” a hero­ic pantomime in three acts, directed by Pierre Jaymond.

Jaymond, however, was finding that rehearsals and perform­ances in the circus left him insufficient time to maintain a reasonable level of activity in the wine and food business. Simonet was forced to take up much of the burden of managing the shop; this might have led to tensions between the two partners. By early May, Jaymond was forced to announce that his partnership with Simonet had been dissolved. The shop at Second and South Streets, under Jaymond’s sole management, would still be open for the sale of light refreshments, while Simonet would continue to operate his original shop up the street.

Finally, in July 1797, Jaymond placed an ad in the newspapers in­forming the public that his arrangement with Philippe Lailson in the circus was taking the whole of his energies. He had found it impossible to continue to operate a shop at the same time. All his furniture and merchandise were placed on sale. 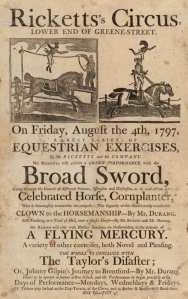 Jaymond also announced that Lailson’s Circus had been gracious enough to arrange a performance for his benefit on July 12. For the next few days, Jaymond would be present at Simonet’s pastry shop to greet the public and to sell tickets to the event. But within weeks, Lailson’s Circus became over­bur­dened by finan­cial difficulties. It was not easy to attract audiences under the current conditions—a raging yellow fever epidemic coupled with a severe economic depression. Creditors seized the new amphitheatre, and Lailson and Jay­mond, now part­­ners, decided to move operations to New York City.

Less than a year after the flight of its owners to New York, on July 8, 1798, Lailson’s Philadelphia amphitheatre was heavily damaged when its magnificent dome collapsed. The following year, Ricketts’ Pantheon was demolished in a fire, though the horses and settings were saved, and no people were injured. Ricketts briefly moved his circus to the refurbished building that Lailson had owned; he died a few years later in a shipwreck.

Simonet continued operating his pastry shop for another couple of years, and his family then moved to Charleston, S.C., where Placide based his theatre troupe. An 1810 article in Port Folio magazine stated that Simonet had been tortured and killed six years earlier in a massacre of white settlers in Haiti perpetrated by soldiers commanded by Gov. Jean-Jacques Dessalines. There is no doubt that Simonet died around that time, but it is difficult to verify whether the report of Simonet’s murder during the revolution in far-off Haiti was true.

Top illustration: Ricketts’ Circus, Sixth and Chestnut Street, Philadelphia, in the 1790s. To the left is Congress Hall, still standing. To the right is Oeller’s Hotel, destroyed with the circus in the 1799 fire.

This article appeared in the November 2016 edition of QVNA, the magazine of the Queen Village Neighbors Association. More information on Etienne Simonet and other early Philadelphia circus performers can be found in Michael Schreiber’s book, “Unsinkable Patriot: The Life and Times of Thomas Cave in Revolutionary America.”