By MICHAEL SCHREIBER and AMY GRANT

This is the first in a series of short biographical articles about people who are buried in the churchyard of Gloria Dei (Old Swedes Church) in Philadelphia. The articles are part of a project to systematically catalogue and identify the grave sites. The first burials at Gloria Dei took place soon after 1677; today, due to time and air pollution, most of the tombstones are no longer readable. Accordingly, the project will erect a number of plaques containing biographical information near the graves of the people whom they describe. The written biographies will include not only people who were famous in their time but also those who represent the “ordinary” people of early Pennsylvania.

Jacob Jackson, whose body rests near those of his wife Catharine (also spelled Catherine) and several of their children, was a U.S. Navy veteran of the War of 1812. He was an active supporter of Gloria Dei (Old Swedes’ Church), elected as a member of the vestry in 1842.

Jackson was born in Sweden on Oct. 14, 1779. He emigrated to this country probably around the beginning of the 19th century—soon finding work as a seaman. On April 19, 1808, he married Catharine Denike at Gloria Dei.

Catharine came from a family of maritime men. Her father was the sea captain, Davis Denike, who was active for many years in the coastal trade between Philadelphia and ports on Chesapeake Bay. Her mother was the former Elizabeth Suter, a tavern keeper’s daughter. Catharine’s grandmother, Ann Suter, managed a famous tavern at the southeast corner of High and Strawberry Streets and might have been the Widow Suter who ran the famous Fountain Inn in Georgetown, Md. (later part of Washington, D.C.) until 1796.

By that time, the war with Britain was heating up. Jacob Sr. enlisted with the U.S. Navy on Nov. 8, 1813, and was away from his young family for over a year.

The application for a widow’s military pension that Catharine Jackson submitted in 1871 indicates that Jacob served on the Scorpion—a likely reference to the sloop/gunboat that operated as Admiral Joshua Barney’s flagship for the Chesapeake Fleet. It probably had a single mast and, according to one witness, it carried five cannon. 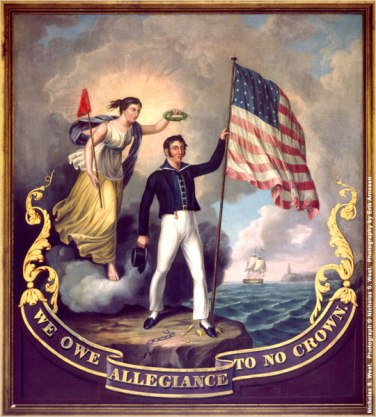 It appears that after about sixty days, Jackson transferred to the USS Adams, which was being fitted out in Washington, D.C., at the time.  The Adams was a 28-gun frigate, first commissioned in New York City in 1799 and enlarged at the beginning of the War of 1812. The vessel was nicknamed the Little Adams to distinguish it from the larger frigate, the John Adams. Jackson served as boatswain.

After being bottled up by the British in Chesapeake Bay, the USS Adams managed to slip past the blockade on Jan. 18, 1814, and went on to cruise the Atlantic. In April, the frigate made repairs in Savannah, Ga., and a month later sailed to the environs of the British Isles. On the return to North America, on Aug. 17, 1814, she ran aground on the Isle au Haut (now in Maine). The vessel limped into the Penobscot River and reached Hampden, Mass. (now Maine). During the battle of Hampden, the crew abandoned the USS Adams and set her on fire to avoid capture by the enemy.

After his discharge from the Navy (Dec. 13, 1814), Jacob Jackson remained home for about three months. On March 25, 1815, he shipped out once again, this time on the Scattergood, bound for Cork, Ireland. The master, Charles Dixey, described Jackson in his crew manifest (submitted to the Philadelphia port authorities) as being 35 years old, 5 feet – 8 1/2 inches tall, with a fair complexion and sandy hair.

Ship manifests show that in 1817 and 1818, Jacob Jackson made at least four voyages on the Lancaster (William West, master), which sailed between Philadelphia and Liverpool.

His name appears near the top of the list on the manifest, indicating he had some responsibility on board the ship, possibly as a mate. Curiously, although many documents and his gravestone state that Jackson was born in Sweden, the ship’s manifest alleges that he was born in Lancaster, Pa. It is very possible that Jackson was striving to appear to be a native-born American citizen in order to escape being kidnapped while on the high seas to work on a British or French warship. Accordingly, he might have conveniently chosen the name of his vessel, the Lancaster, as his fictional birthplace. The Lancaster’s crew list likewise states that one of Jackson’s shipmates, a man named Segerland, was born in Philadelphia, although Segerland reported on later voyages that he was born in Sweden.

In 1821-22, Jackson followed Capt. William West onto another ship in the Liverpool trade, the Tuscarora. The voyage of the Tuscarora in July 1822, this time under Capt. James Serrill, is the last mention of Jacob Jackson on a ship’s manifest. Soon afterward, he entered a new trade, that of a stevedore.

In 1828, at age 16, Jacob Jr. chose to become a mariner—just like his father, grandfather, and uncles. On Dec. 17 of that year, he was accompanied by his mother to a notary public, where he applied for seaman’s papers. His first ship was the Monongahela, a packet ship that carried freight and passengers between Philadelphia and Liverpool. Young Jackson served as a deck boy under Capt. Charles Dixey—the master of the Scattergood some 13 years earlier when Jacob Jr.’s father was working on it. Jacob Jackson Jr. sailed on his 17th birthday—April 16, 1829.

Five weeks later, Jacob Jackson Jr. voyaged to Havana, Cuba, on the brig Good Hope. This time, he was accompanied by his uncle Samuel Denike, who was two years older than his nephew. The two were often shipmates, and would remain close friends until Jacob Jr.’s death many years later. In 1831, for example, both young men served on Jacob Jackson Sr.’s old ship, the Tuscarora, which was still captained by James Serrill.

The Jackson family lived in the district of Southwark, just south of the Philadelphia city line. Until 1822, they resided at 41 Catherine Street. The following year, they moved around the corner to 230 Swanson Street, and in 1825 they moved to 53 Catherine Street, where they remained for around ten years. All of these houses were merely a block from the Delaware River waterfront in a neighborhood of people engaged in shipbuilding and the maritime trade—sailors, dockworkers, rope makers, sail makers, carpenters, and caulkers.

In 1830, the Jackson family bought a house at 23 Christian Street (later they lived at 17 Christian Street, quite likely the same building but re-numbered). The Jacksons did not move into the house until around five years later—most likely renting it to tenants in the meantime. The house was between Swanson and Front, just a stone’s throw from Gloria Dei Church. It was fairly large, three stories plus a garret, and was not torn down until 1957—one of the first casualties of the city’s misguided “redevelopment” schemes of the period, which resulted in the demolition of hundreds of historic buildings along the Delaware River.

As reported above, around 1825, Jacob Jackson began working as a stevedore on the Philadelphia docks—which enabled him to spend more time at home with his growing family. Work along the waterfront was heavy and dangerous, and pay was very low. According to historian Bruce Laurie, most dockworkers in Philadelphia at the beginning of the 19th century were African Americans. Beginning in the 1830s, waves of Irish immigrants poured into the area, and by the end of the next decade they became the dominant ethnic group working on the docks. Riots and pitched battles took place in the neighborhood throughout the 1830s and ’40s, as nativist whites sought to dislodge Blacks and Irish from employment opportunities.

Labor struggles were also turbulent, with skirmishes between striking workers and scabs and police. In 1835, Irish workers on the Schuylkill River coal docks struck for the 10-hour day. That action soon escalated into a general strike—the first in North America. The following year, Philadelphia stevedores participated in a strike that closed ports throughout the East Coast; the workers earned 10 shillings a day and demanded a raise to 12 shillings. Local strikes also took place in 1850 and 1851.

Although Jacob Jackson was listed in directories as a stevedore, he probably worked in a more privileged capacity than most dockworkers—particularly as he grew older. Perhaps Jackson operated a crane, or ran his own steerage company. Evidence suggests that the Jacksons were able to accumulate a moderate amount of wealth. The 1850 census shows that they employed two servants who lived with them in the large Christian Street house. One was Harriet Nelson, 32, and the other was William H. Derrin, a 10-year-old African American boy. Five of the Jackson’s adult children, such as Jacob Jr. on his sojourns between sea voyages, also lived in the house.

The fact that Jacob Jackson Sr. had achieved some standing in his community is seen by the fact that “Jacob Jackson, stevedore” appears as a reference in an ad for a portable steam hoisting and pumping engine that appeared in a 1854 issue of the Journal of the Franklin Institute. In 1849, Jacob Jackson’s name came up in the receipt books of the Philadelphia City Commissioners’ office when he purchased 50 horse loads of paving stones to be used as ballast on the Monongahela. It was quite likely the same ship that Capt. Dixey had commanded and that young Jacob Jr. had served on twenty years earlier.

In later life, after having retired from his job, Jacob Jackson is listed in city directories as a “gentleman.” He and Catharine encountered tragedy when their son James M. Jackson died in September 1859 at age 38.

Jacob Jackson Sr. lived through the Civil War. He died at age 86 on Nov. 14, 1865, after a short illness; the funeral was held at the house on Christian Street. Catharine lived for another eight years, but unfortunately, just eight months after her husband’s death, she  had to bear the dreadful news that their first son, Jacob Jr., had drowned in the Potomac River. He had been inside the sloop Emily, captained by his uncle Samuel Denike, which capsized in a heavy storm. Jackson Jr. is buried in the Gloria Die churchyard next to another uncle, John E. Denike, who was also a mariner; the two share a single tombstone.

The authors will add more information to this article as it becomes available.