This article will appear in the March-April edition of the Queen Village Neighbors Association magazine. In conjunction with this article, an exhibit of an 18th-century milliner’s shop is on display through the end of April in a shop window on Fourth Street, just below Bainbridge, in Philadelphia.

Millinery was an important trade in 18th century Philadelphia, and it was commonly carried out by women. Several millinery shops were located in what is now called Queen Village, especially in the New Market of S. Second Street—the Head House Square of our own times.

Today, milliners are generally considered to be makers or sellers of women’s hats. And hats were the mainstay of the craft in the 18th century as well. But milliners also put together or sold a large variety of clothing—often including gowns and mantuas (evolving forms of dresses)—and accessories.

For example, Anne and Jane Smith, who had a shop in Chestnut Street, advertised in 1784 that they carried “an elegant assortment of the most fashionable Millinary Goods, consisting of gauzes, gloves, ribbons, flowers, feathers, moreens, camblets, calimancoes, with a large quantity of ready made goods, balloon hats, Ranelaugh cloaks, etc.”*

The milliner was the clothes stylist of her day. She would sometimes purchase gowns from tailors, and then finish them with ribbons, lace, and other trimmings for the retail trade. Sometimes, clients would ask her to update their older garments to be in accordance with the latest fashion. The milliner’s best creations were, of course, not intended for purchase by the very poor but by middling or wealthy classes of people—who found pleasure in trying to keep up with what was fashionable. But milliners also sold common goods like mob caps and shifts that poor women might use.

As the American Revolution was brought to a close, and trans-Atlantic trade began to revive, merchants sought to satisfy their wealthier customers’ hunger for luxury goods that had been unavailable during the war. And milliners also swept in from abroad, offering assurances to fashion-hungry American women that the products they had for sale were in tune with the latest European styles. In the 1780s, ultra-wide hats, adorned with ribbons and feathers, were considered tres a la mode. 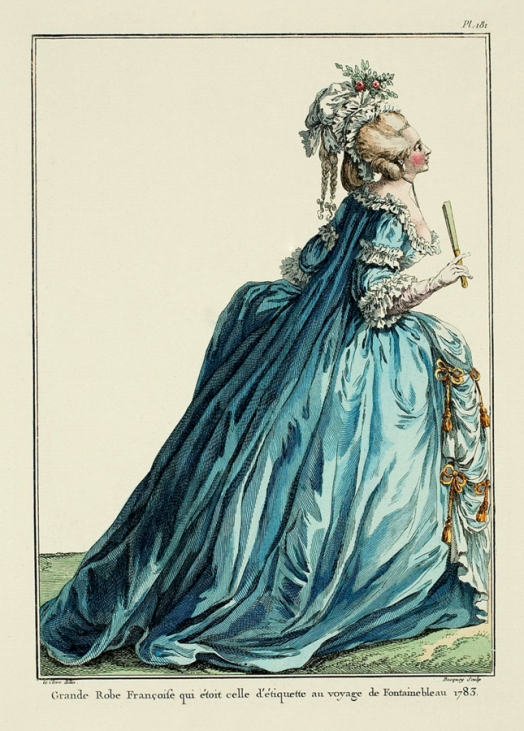 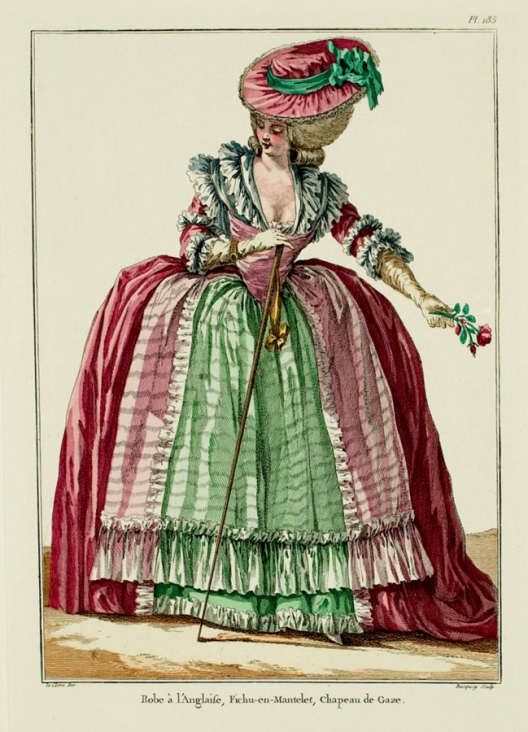 In this vein, a Mrs. Snowden gave notice “to the Ladies” in 1784 that she was a “milliner just arrived from London, but last from Paris.” She stated in the Pennsylvania Packet that she had for sale in her shop near Second and Spruce, “Caps of the most elegant sort, and newest fashion, such as are worn by their Majesties of England and France, on court and other days, trimmings for Gowns of exquisite taste, and all other articles, too numerous to mention, being her own manufacture, can thereby sell very reasonable.”

Mrs. Snowden also had “a few elegant Gold Watches of the newest pattern, Jewelry of a most brilliant appearance, and which she can venture to pronounce matchless on the continent.”

A competing milliner from England, Jan Coulthard, in “Second-street, a few doors below the Dock,” advertised that she was both a manufacturer and an importer of British ready-made goods. She assured her customers that “by her genteel connections in London, [she] will be constantly supplied with the newest fashions.”

On the west side of Second Street between Pine and Lombard, there were no less than three millinery shops in the 1780s and ’90s. Mrs. Le Bouteillier, at 220 S. Second, on the corner with Lombard, advertised that she made “ladies’ robes of the latest fashions of Paris and London, mantuas and cloaks, great silk coats for ladies and gentlemen, lined with wadding, remarkable for their lightness, and warmer than any other generally worn in this country.”

Mrs. Le Bouteiller also made “hats and bonnets according to the English and French fashions, having lately received from London and Paris the models and ornaments.” And she sold “sattinets of the newest taste for hats, plumes, laces and veils, assorted silks, muslin handkerchiefs and shawls, gloves for ladies and gentlemen, French and English silk stockings.”

A few doors up, at 212 S. Second Street, was the shop owned by two Black milliners and mantua-makers, Jane Mullen and Rebecca Lincoln. And Arabella Stewart ran her millinery shop next door at 210 S. Second.

Mullen and Lincoln seem to have prospered in their trade; they soon acquired enough funds to partner in land purchases along South Street and near Gray’s Ferry. We might expect that many or most of their customers came from Philadelphia’s relatively large African American community—both slave and free. Like Mullen and Lincoln themselves, a few Black families had risen into the middling class (skilled artisans, shopkeepers, clergymen, etc.) and could afford fancier or better-made clothing.

Following the Black revolution in Haiti, exiled French-speaking colonial families arrived by the shipload with their slaves. Because of Pennsylvania law, the slaves had to be freed after six months. As a consequence, people in colorful Afro-Caribbean-styled clothing were often seen on the streets of Philadelphia in this period, and the look became popular. Women often wore white or bright-colored skirts, petticoats, and aprons, with wrapped kerchiefs as headdresses. Perhaps Mullen and Lincoln offered garments in this style?

Around 1795, Mullen and Lincoln moved their shop to the east side of S. Second Street. The same year, Eugenia Simonet, of French descent, opened her own millinery shop a few doors away at 245 S. Second Street in the New Market. It was located at the same address (perhaps upstairs) as her husband’s well-frequented restaurant and patisserie, and offered hats and bonnets “just received from Paris.”

By that time, women’s clothing styles were becoming much less ornamented and ruffled than they had been earlier. Cotton came into fashion as a fabric. Gowns were lighter, sheerer, narrower, and more naturally fitting to the body. Hoop skirts, ballooning petticoats, and tight-fitting stays or corsets were temporarily abandoned. Wide and elaborate hats fell from favor, but turbans were popular in wealthy circles.

The democratic ideals of the French Revolution were given a visual context with the discoveries of ancient Greek and Roman statuary. This had a corresponding effect on styles in architecture, furniture, and women’s clothing, and by the end of the 18th century, gowns often tended to mimic the forms seen on the statues of Greek goddesses.

The popularity of ultra-light fabrics—even during the cold winter season—be seen in a December 1815 advertisement by Mrs. LeBouteillier, who had moved her millinery shop to S. Fourth Street. She stated that she had for sale, in addition to Christmas gifts, “an extensive assortment of elegant dresses, in Thulle [a lacy netting-type fabric], Crape, and Gauze, ornamented with Pearls.”

The milliner’s shop surged in popularity in the 19th century, but was now more narrowly focused on making and selling hats and bonnets, which had greatly returned to fashion. In the 20th century, hats continued as a necessary element of women’s wear for many years, giving steady work to milliners, many of whom were now employed by the big department stores. As the sign on Philadelphia’s old Lit Brothers building still proclaims: “Hats trimmed free of charge.”