The French balloonist and his two dogs

At 3 in the afternoon on New Years Eve, Dec. 31, 1792, the celebrated French aerialist Jean-Pierre Blanchard was at the New Market at Second and Lombard Streets in Philadelphia, visiting the numerous French shops—all gaily decorated for the Christmas season.

Blanchard had sched­uled a launching of his giant balloon in a little more than a week. Now the aeronaut was selling tickets to the event at five dollars each, and he was confident that some of the French merchants of Second Street would be eager to apply. When they encountered Blanchard, many were surprised that the international hero was quite dainty in size; but what he lacked in physical stature he made up for in flamboyance.

Blanchard’s admirers were also enchanted by his small pet dog. She was far unlike the local mongrels, descending from a pure Spanish breed and sporting a fashionable cut. She had, wrote Blanchard, “half the body shorn, the hair of the other half long, silky and white, with ears of a bright golden yellow and a few spots of the same colour.” 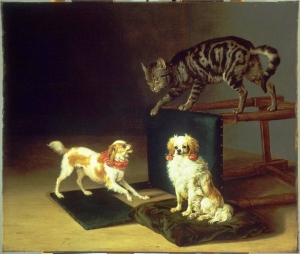 From the description, Blanchard’s dog was most likely a Spaniel, a word supposedly derived from the Old French “espaigneul” (Spanish). The name referred to the breed’s as­sumed country of origin. Spaniels were bred to flush game out of thickets, and often used as shepherds, but the smaller breeds later became lap­dogs for the Spanish aristocracy. A folkloric painting of two “Spanish dogs,” rend­ered by Dutch artist Paulus Potter in 1652, hangs in the Philadelphia Muse­um of Art. Potter’s parable shows the pampered dogs, adorned with red ruffs and earrings, as a representation of the Spanish Court cowering before a feroci­ous housecat, symbolizing the Netherlands Republic.

While strolling in Second Street with his dog, we can suppose that Blanchard, showman that he was, allowed time to recount to the adoring crowd the stories of his many balloon launches. And perhaps it was Blanchard’s engrossment in his tales that distracted him from keeping a close watch over the Spaniel; at some point she disappeared. She might have been stolen, of course. Monsieur Blanchard placed an ad in the General Advertiser under the title, “Bitch Lost,” and offered fifteen dollars reward to anyone who would deliver the dog to him at his rooms in Oellers’ Hotel.9

Did a farmer at the market shove Blan­chard’s pet into his wagon and abscond with her from the city? That seems to have happened on occasion; one dog that earlier disap­peared in the vicinity was later spotted in rural Bucks County. How­ever, a fancy and coddled pet would be small help as a hunter or watchdog. The mystery remained.

The day for the balloon launching arrived on Wednesday, Jan. 9, 1793. Blan­chard noted in his journal that he rose before 4 a.m., when the pre-dawn sky was “spangled with ten thousand glitter­ing stars.” He left the hotel and made his way down Sixth Street to the launch site, the Walnut Street Prison. An assortment of spectators soon assembled in the prison yard, includ­ing George Washington and his cabinet, schol­ars in the sciences, and other distin­guished guests. But the vast bulk of the population preferred to stand in the surrounding streets or in the Potters’ Field (now Washington Square); some even climbed onto rooftops. People assumed that from those vantage points they would have a clear view of the airborne craft while avoiding the need to pay for tickets.

Those who did not shirk the ticket fee, and had managed to come early, were able to observe the balloon still neatly folded over a blue spangled boat. They could watch the assistants ar­range a net over the yellow silk, and then inflate it with hydrogen (“inflammable air”), which was produced in cylinders filled with a mixture of iron filings, water, and lastly vitriolic acid. Once inflated, the vehicle tugged at its anchor lines, as if eager to start its journey.

At precisely 10 a.m., the artillery gave its final salute. President Washington shook hands with Blanchard and handed him a paper—a letter he had signed requesting citizens to aid the balloonist after his landing. Blanchard then turned his head to give a farewell survey of the meager crowd in the prison yard. Before he could take measures to launch the craft, how­ever, a friend thrust a parting gift into his hands. It was a wonder­ful sur­prise—a small dog. It was not Blanchard’s blonde Spanish beauty; she had been irretriev­ably lost, but this pretty black one was to be her replacement.

At ten minutes after the hour, Blanchard cast off some ballast, doffed his hat, and rose in the air. As soon as the balloon caught the wind, it set off in a southeasterly direction, and flew over the length of South­wark (now Queen Village and Pennsport). The aerialist noted in his journal that “for a long time could I hear the cries of joy which rent the air.”

Soon Blanchard had left the city behind and approached the marsh­es at the confluence of the Delaware and Schuyl­kill Rivers. But he soon had to shift attention to his small companion. Just when the balloon had reached its highest altitude, 5812 feet above sea level, the dog showed signs of sickness. She attempted several times to escape the car, but seeing no firm landing place, decided instead to snuggle close to her new owner’s side and whine softly. Blanchard calmed her with a morsel of biscuit, while he drank a glass of wine.

On the Jersey side of the river, Blanchard saw an almost endless expanse of marshy woodlands. When a small meadow came into view (near Deptford, N.J.), he prepared a landing. Once the balloon had come to rest, he released the dog from her confinement; as soon as she was free, the animal leapt from the basket and ran to drink from a nearby muddy pool. However, she quickly returned without coaxing, allowing Blanchard to contemplate how to make his way through the woods, across the river, and to the city.

As Blanchard began to consult his compass, he heard the crack­ling of footsteps in the brush. It was a local farmer, who apparent­ly had been startled by the ob­ject he saw coming down from the sky and hastened to in­vest­igate. The man seemed to be frightened by the strange contraption before him, whose balloon was writhing and gasping as the gas within expired. Blanchard, speaking little English, could say no­thing to reassure him. But he was able to slowly win the farmer’s con­fidence by grasping another wine bottle, gesturing with a smile, and taking a few demonstrative sips to indicate that the man was welcome to share it.

Soon another farmer arrived—this one brandishing a shot­­­gun —and two women and several men on horseback followed. Blan­chard showed them the letter that President Washington had written on his behalf, which greatly pleased them. He was given a horse to ride, while the airship was placed in a wagon. The group guided him about three miles to a tavern, where, perhaps not purely by chance, a group of foxhunters from Phila­del­phia was sup­­ping at the time. One of them, Philadelphia High Sheriff Jona­than Penrose, offered Blanchard a seat in his carriage.

They then caught a ferry across the river and landed at Gloucester Point, three miles south of the city on the Pennsylvania side. It was dark when they arrived at Penrose’s rambling old-fashioned house at the corner of Front and Catharine Streets in Southwark. Sheriff Penrose’s wife, Ann, was probably present in the sitting room to receive their distinguished visitor and his pretty dog.

After a light dinner, the sheriff guided Blanchard and his dog to their lodgings at Oellers’ Hotel. Though it was already after 7 o’clock, however, Blanchard felt obliged to pay his respects that evening to President Washington, and to inform him of the happy effects of the passport that the president had given him.

Later in the year, on June 6, Blanchard’s dog, now an experienced balloonist in her own right, made a flight without her owner, and accompanied only by a cat and a squirrel. The animals, no doubt pacified enough to avoid devouring each other, were housed within a basket suspended from a parachute. A fuse was lit in order to disengage the connection between the parachute and the balloon once the vehicle had reached the height of over one mile from the ground. Everything worked perfectly; the parachute landed the animals safely near Bush Hill mansion (17th and Callowhill), while the balloon soared on above the clouds, and was found in the evening far along the Delaware.

This article is adapted and abridged from a chapter in Michael Schreiber’s book, “Unsinkable Patriot: The Life and Times of Thomas Cave in Revolutionary America.” Many of the details are based on Jean-Pierre Blanchard’s account in his journal. Blanchard is pictured at top of article.